In the concert “In algorithmic waves” we get to experience four works by Xenakis, Saunders, Lindberg and the World premiere of Jesper Nordins’ “Wave“ streamed live from Stadtcasino in Basel. But this isn’t a regular Sinfonietta performance as Jesper Nordin has also integrated his patented interactive music technology Gestrument into the experience. 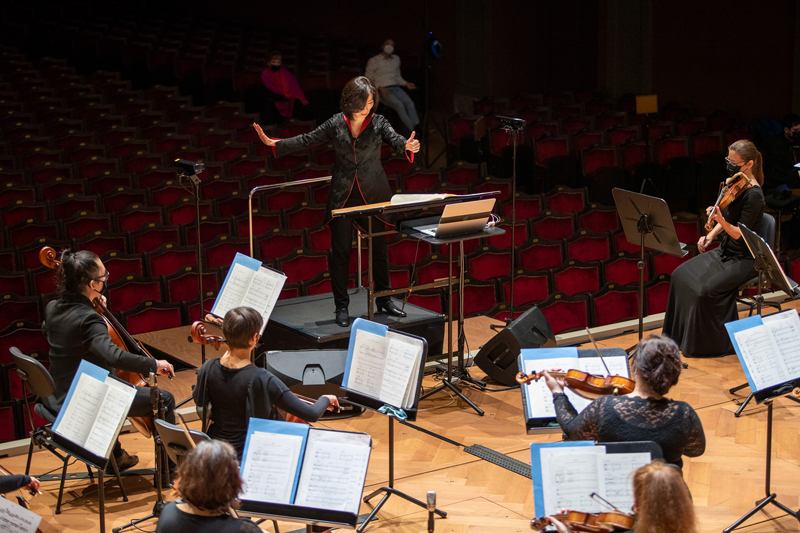 The mix of the Basel Sinfonietta and the algorithmic music generated by Gestrument not only pushes the overall sound into something new and interesting, but also expands the role of the conductor.

“In Wave, acting both as a soloist and a conductor, the experience of making music together with the orchestra expanded into multiple dimensions”, says Lin Liao.

“In one way, I really needed to organise all my gestures precisely – interacting with the orchestra, playing the Gestrument and communicating with the sound engineer. In another way, I was able to improvise with the Gestrument, to shape the sounds multifariously and to be a chamber music-partner of the orchestra, where I did also experience music-making freely and creatively as a musician. It was such a fantastic and joyful moment to have all these aspects at the same time!” 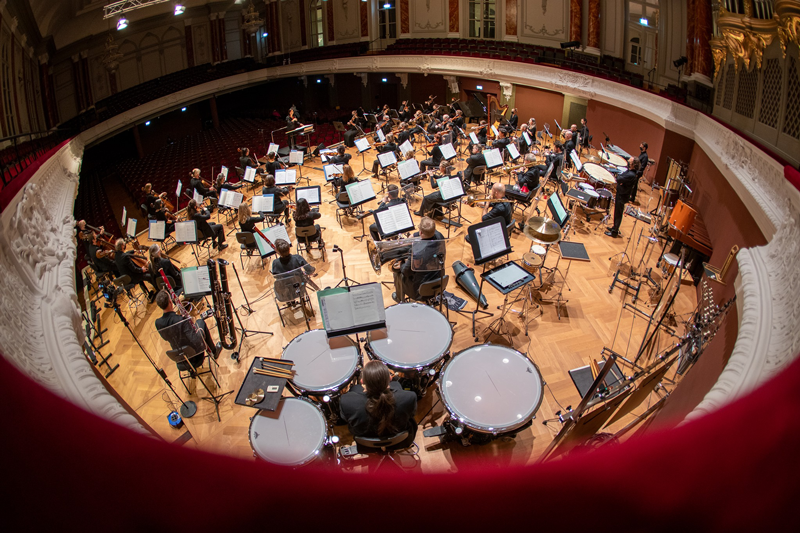 In Wave, two Kinect cameras work as control input, one on each side of the conductor. The cameras read the hand movements of the conductor, translating it to note-by-note live generative music based on the musical rules composed by Jesper Nordin. The resulting output is combined as two extra digital instruments, or actually two extra virtual orchestras, played by the conductor in addition to the live orchestra.

More complexity to the role of the conductor

In a review of In algorithmic waves, Rolf Kyburz highlights the complexity of conducting a full orchestra and at the same time play a digital instrument:

“It was fascinating to observe how Lin Liao mastered the complexity of her role. She was reading the big score and controlling the motion sensors on either side with clear, precise gestures (controlling the pitch and shaping the volume). Alternating with the’“device control’, or even at the same time, she was directing the orchestra with a different set of gestures, which of course had to be confined to the space right in front of her. Obviously, false or inadvertent movements towards the sensors would have caused audible disruptions.”

What is generative music?

Generative music can be defined and described in many ways. One could argue that a fugue by J. S. Bach is generative since it is a highly rule based composition, but on Wikipedia it is described as “ever-different and changing, and created by a system”. The system is a set of musical rules – what notes can be played, what instruments, at what rhythm patterns can it evolve in, how can the intensity vary, how the chord progression changes and many more elements are defined.

But what makes this any different? Well, Jesper Nordin designed these rules to match the rest of this specific composition. In this concert scenario the Gestrument algorithm generates the music in real time based on the input controls – in this case the hand movements of conductor Lin Liao. The music changes based on the hand movements and it demands a high level of accuracy and precision. Moving the hand vertically changes the pitch, moving the hand horizontally changes the rhythmic content, and moving the hand closer to the Kinect camera increases the intensity. This creates a digital instrument playable in a 3D space, fully adopted to the operators’ choice of movements.

Nature, science and mathematical algorithms with the Basel Sinfonietta
“Lin Liao, a Taiwanese conductor who now lives in Germany, presented a poised, focused presence at the podium, ramrod straight, without a baton, coaxing a wide range of colors, musical shapes, and feelings from the orchestra as it performed the works of four composers active in the past 60 years.”
https://bachtrack.com/review-video-lin-liao-xenakis-saunders-nordin-lindberg-basel-sinfonietta-march-2021