In the piece “Emerging from Currents and Waves” I have used Gestrument Pro both in the compositional process and in the live performance. Gestrument Pro is controlled by three Kinect cameras that are played by the soloist Martin Fröst and the conductor Esa-Pekka Salonen.

Most of the time I have used the same settings when composing the score as I later used for the performers in the live situation. In that way the score and the live performance of Gestrument Pro becomes very closely integrated. View the score here (Emerging), here (Currents), and here (Waves)

From the program of the first performance:

“Emerging from Currents and Waves” is a work commissioned by the Swedish Radio Symphony Orchestra, IRCAM and the French Radio Philharmonic Orchestra and was written specially by Jesper Nordin for Martin Fröst and Esa-Pekka Salonen. It was premiered during the Baltic Sea Festival 2018 in Berwaldhallen, Stockholm.

“When you stand very close to something that is transforming, or when you are in the middle of a process, you are rarely able to predict where it will lead. You might be able to imagine some of the implications, but you will not know for sure until afterwards. The emergence of social media, virtual reality and artificial intelligence is changing not only our culture, but our entire society, and those of us who exist in the midst of that process have limited possibilities to predict the outcome.

The amazing thing about art is that you can ask questions and conjure up visions at the same time. Where is art heading? Can the seemingly endless possibilities of technology also be a bridge to the depth of tradition? In what ways will art, artistic expression and the opportunities for practising it, be affected by new technology? Will the potential birth of artificial intelligence be as large an evolutionary leap as life emerging from the oceans?”

This is what Jesper Nordin himself writes about Emerging from Currents and Waves, which is part of a larger collaboration between Nordin, Fröst and Salonen where they explore the interaction between man, music and technology in a variety of contexts. 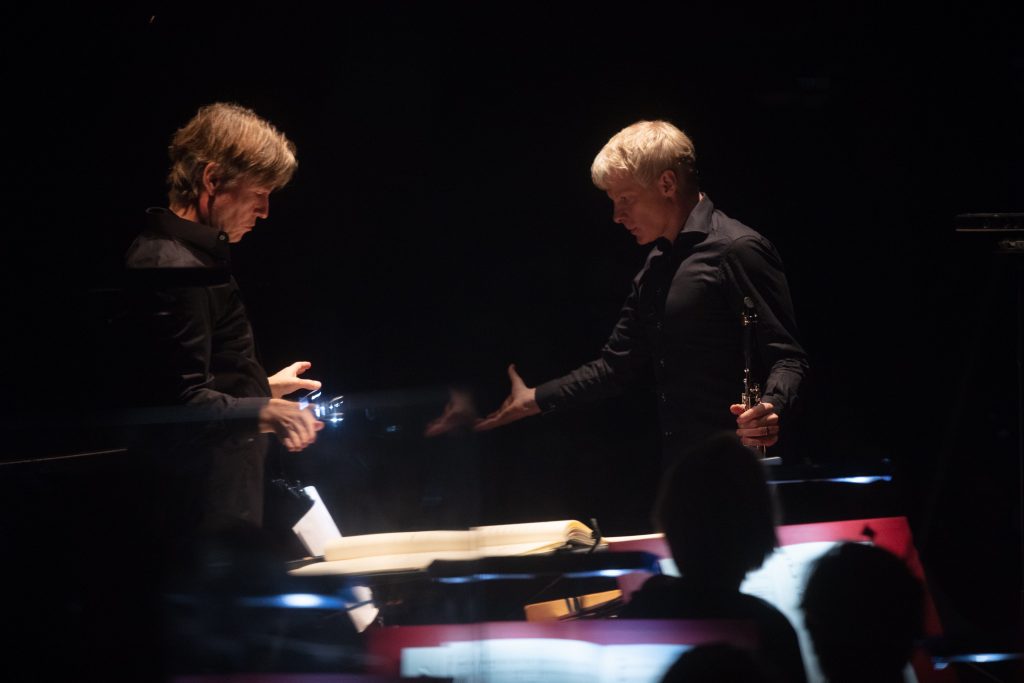 The innovative composition and improvisation tool, Gestrument Pro, was originally invented by Jesper Nordin for his own composing. When universities and conservatories around the world became interested in it, he developed an app that anyone can download and use. What is particular about the software is that it exists in the boundary between an instrument and a composition, and likewise between what and how much we can control in a digital environment, and what we relinquish once we have established the rules.

The software is pre-set using what Nordin himself calls the “musical DNA”: rhythms, scales, melodies and sounds. Based on those parameters, Gestrument Pro can then be played, like an instrument. In parts of the piece, the Swedish Radio Symphony Orchestra will be recorded in real time, sampled, and then played back using motion sensors – also controlled from the podium by Esa-Pekka Salonen. In addition to the coupling of acoustic and digital instruments, there is also a profound encounter between different art forms. Martin Fröst’s movements, when he plays Gestrument Pro, have been developed by a choreographer and with the help of a stage designer and a visual programmer, everything that happens electronically is portrayed in real time in the interactive installation.